After playing Gone Home (a game that I think is the most brilliant thing since sliced bread and encourage you to buy it immediately) I fell into the indie game rabbit hole on Steam and was really taken with the trailer (linked above) for The Novelist. Watch it. It’s kind of creepy, right?

I ended up playing through the game for the first time last week. The gameplay itself is incredibly simple and easy to pick up. I was a bit disappointed in the lack of total functionality of the beach house itself, but I think I got a little spoiled in Gone Home due to the fact that you could pretty much touch, open, turn off and on, and literally chuck almost anything on the floor in that particular game’s house. Regardless, this game isn’t about graphics. This game is about choices and how your choices shape not only your future but the also the lives of those who love you.

I find it difficult to discuss the game in too much depth because I don’t want to spoil the general storyline, but I will admit that the longer I played the more time it took for me to weigh the needs and wants of each of the 3 family members. You’re only allowed to choose one person’s “request” in each scenario so 2 people are always disappointed. You do have the option of selecting a second family member’s request to be “granted” in a compromise but they don’t generally end up being very happy about that.

I actually began to feel a little anxious for my fictional family. If I pleased Tommy (the child) would the father’s work suffer? If Dan (the father) was given his every whim would he revert into a self-involved hermit? Did Linda (the mother) have to give up her art for the betterment of the family unit? Then you close out the game with a HUGE decision that simply cannot leave everyone fulfilled. The effects of your final choice are revealed in an epilogue and I seriously did end up ruining Tommy’s life. So that bodes well for me being a mother…

That being said I hope to go through the game another time and see how much of the storyline actually changes when different choice combinations are made. I also wonder at the plausibility of this game being used in a classroom? Are there any psychology teachers out there? What do you think? I have a hunch that using this game in a well-structured activity would generate quite a bit of chatter or at the very least reveal a little bit about yourself. After all, as many other reviewers have noted, you’re the omniscient entity puppeteering the Kaplans and there’s no way (if you’re taking it seriously) that experiences in your own life aren’t steering you toward certain decisions in the game. That warrants a journal entry or two, right?

There are some very interesting articles about The Novelist and even a number of walkthroughs posted on YouTube but I strongly encourage you to play the game in order to get the full effect.

Have you played? What did you think? 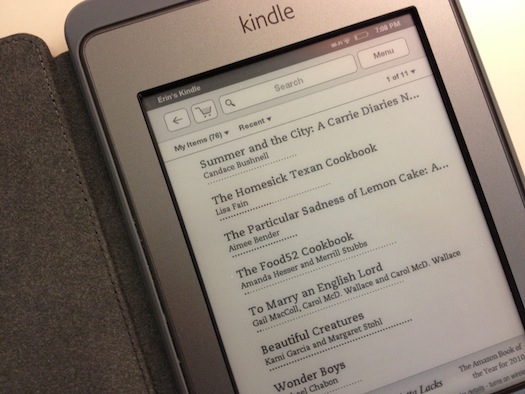 I adore my Kindle and read fiction as much and as often as I possibly can on it. However, when it comes to retaining unfamiliar information, especially educational articles or books on topics I really want to learn (and actually be able to explain to someone else) I find that I have to go the “old fashioned” route and either purchase a physical version or print out a hard copy. There are articles citing studies that note contradicting points of view on this subject. Some say your retention rates are the same, some say eBooks aren’t cutting it. In the end I feel that it really just ends up being your personal preference. I need my pink highlighter in hand and you might be just fine with touch highlighting all of your favorite quotes in an eReader.

Where am I going with this and what does it have to do with Blackboard and printing? Well, when I first began working in my current position we manually created and embedded PDF files of weekly course content for our online students. They found this very helpful. In addition, the process for our staff was simple and straightforward, but when we upgraded to Blackboard 9 the trusty File+Print+Save to PDF trick just wouldn’t work. The page view was hopelessly truncated. At this time many instructors also began to use the learning module feature for their online courses which makes it impossible for students to print a linear document of their assignments on their own at all. Which is one of the MANY reasons why I prefer the use of weekly folders of content over learning modules but that’s a rant for a different day.

So I fumbled around and googled and couldn’t find anything helpful. It sort of felt like the LMS was forcing you to only access your content on your computer, but guess what, a huge segment of the population needs to be able to print reading material. Eventually I discovered that if I right-clicked on content folders or modules and had them open in new windows I could once again create full printable versions of a course’s content. Also interesting is that, for some reason, I’ve only ever been able to get this to work in Chrome.

If you’d like to walk through the steps I use to make Blackboard printables you can view this downloadable tutorial. It looks daunting at first but I promise that after you make a handful of PDFs you’ll be able to complete the action in seconds. In addition, here’s an example of how the printable might appear for you. Note: Any large blank spaces are embedded YouTube Videos that do not appear to translate as an image onto the PDF. And yes, that’s a week of course content I came up with for one of my graduate classes dealing with A Christmas Carol. No laughing!

I’d love to know if anyone has been able to print content in Blackboard 9 (and up) in another (hopefully more simple) manner. If so, definitely let me know!

I thought that in this case I’d actually keep the default WordPress initial post title of “Hello World” as it seemed rather fitting as I’ll be writing on here about topics that are vastly different than those found on my other blogs. There will be no mojito cakes or Top 11 (so random, Erin…) Christmas Special items in this new space.

Instead I hope to touch upon and highlight some of the interests that I encounter in my professional realm of e-Learning, online education, and instructional design. I’ll also share tutorials I’ve created, articles and other readings of interest, and undoubtedly a plethora of posts detailing my quest to get a handle on the use of games in the classroom. I’m so serious about the gaming part of this project that I even built my own PC (with a little help) devoted to gaming — much to the horror of every Apple device in my house. I’m going to make something gorgeous and educationally relevant in Minecraft if it kills me. However, first I have to stop typing and referring to the game as “Mindcraft…” Anyway, welcome! I hope you find the content I post useful.